A God who gives everything???

As they were going along the road, someone said to him, 'I will follow you wherever you go.'
And Jesus said to him, 'Foxes have holes, and birds of the air have nests, but the Son of Man has nowhere to lay his head.'

These words from Luke 9 accompany me everywhere I go. They challenge me when I encounter the flaky people who engage in the error that is to be found in the 'Word of Faith' (WoF) approach to Christianity and keep me focused on the important and real. Especially when they seem to forget that Jesus' words have power and yet theirs, as they proclaim and appear to be telling God what to do, even when they might claim the words of Matthew 21:

'Truly, I say to you, if you have faith and do not doubt, you will not only do what has been done to the fig tree, but even if you say to this mountain, ‘Be taken up and thrown into the sea’, it will happen. And whatever you ask in prayer, you will receive, if you have faith.'

Now don't get me wrong for I am not doubting the words above - but I do doubt those who might think that they can command God to give what they want. we can ask in the knowledge that we have a God who gives His children good things but, like any good parent, He doesn't give us everything we ask for. There is context and balance and so much more to be taken into account.

I'm sure you know who I'm talking about. They preach something that is almost correct and yet there is enough deviation from God's truth that eventually the follower finds themselves well off track - and often still in the same place they were but just a little poorer from all the merchandise, teaching conferences and 'seed gifts'.

The Jewish way of thinking was that health and wealth were affirmations of God's blessing and this persists with those who see prosperity and health as endorsements of that same God in the same old blessings. Yet looking at many who will preach prosperity, with the ever present caveat that if you don't receive there's sin, unconfessed and perhaps unknown, that stops the blessing from coming on through. The Jews also sought God's judgement on people while they lived because they assumed that dying wicked and rich meant they were home free (always good to read the imprecatory Psalms innit) but that denied a judgement later.

This might offend some but I see little to separate many of the WoF folk from those engaged in witchcraft for both seek to control the spiritual realms for their own ends and by their own faith bring that which they want into being. Sadly, both deny Jesus - even though, ironically) they spout the Bible and yet seek to control God - telling Him what to bring them in a confused understanding of what it means when we say 'Jesus is the servant of all mankind'.

So today - wherever we are, whatever needs we have, we can bring them to God in the knowledge that He does hear and does give His children 'good things' - the problem is that broccoli is a good and healthy option when chocolate might not be.

Good health - not a healthy attitude 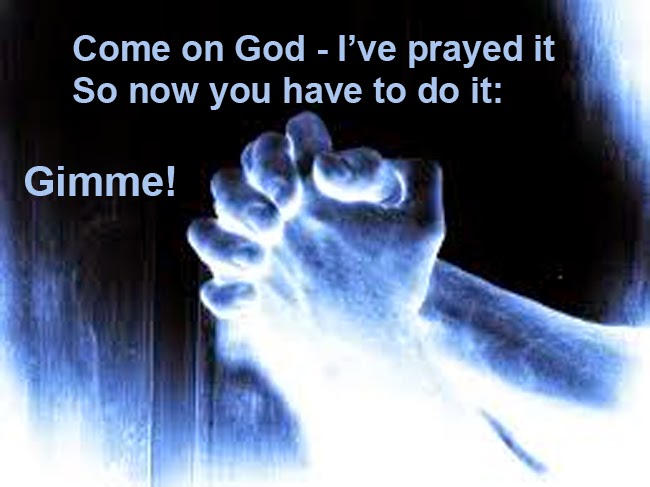 *Wit meaning brainpower (not clever and/or humorous utterances - mind you, it's hard not to laugh innit
Posted by Vic Van Den Bergh at 09:16

Email ThisBlogThis!Share to TwitterShare to FacebookShare to Pinterest
Labels: birds of the air, claim it, commanding god, errors, foxes of the field, heresies, name it, prosperity, word of faith

My sister has one version of the "I asked (God) for..." poem on her wall, I think that the WoF crowd could do with reading that, then reading it again.

Bother, hit Publish too soon. Your comments on witchcraft and control remind me why I distrust "religion" - which for so many gives every appearance of a belief that, by jumping through certain hoops, or saying the right spell or mantra, the adherent can somehow place the Almighty in their debt.

Having come from being under the teaching of one of these prosperity teaching groups I have to say that, although I denied it at the time, you have nailed the situation. I recognise all you speak of and know many who have lives that are broken and have health issues (mental and physical), money issues and children that are quite broken and dysfunctional too.