A thorny issue: Paying your way!

Being totally honest is something I always regard as good and yet something that is rarely applauded! One of the issues where I often find this is regarding the expectations and the realities of a church (meaning a gathering of people who come to worship God in all that He is) 'paying its way!'

There are those who send me letters 'encouraging' to get the congregation to give more in the light of diminishing income and tough financial climates. This is often accompanied by offers of help, should I need it, to inform and encourage better giving.

When further letters of 'encouragement' came I found myself drawing this: 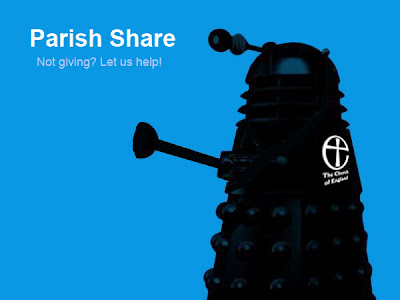 This upset some people because, as they rightly complained that, 'The diocese has to pay its bills and make ends meet!'

And this is, of course, true. Once the money runs out the lights go off and the churches become cold and doors are shut. This is a reality of life: Charity might begin at home but it doesn't extend to utilities and suppliers of stuff who need to be paid to pay their staff and buy in the stuff they sell and the like. It's simple grown up world stuff innit?

One notch down the diocesan food chain we find the churches and they need to pay too. So I wrote this and stuck it on the wall: 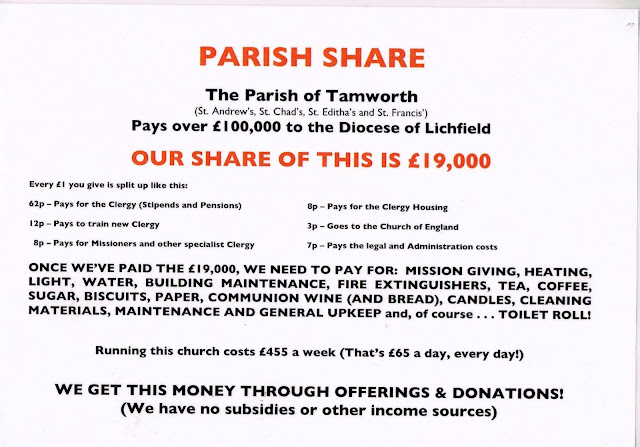 And some people were appalled that I could do such a thing because,they assumed, 'everything was free!'.
The idea was to get people to realise that it cost money to keep a little church like ours afloat and with around 20% of the congregation having an income, this is a challenge for us each and every year.

Then came down from high a memorable little motto from the grown ups in the diocese that upset some who come to church. It went like this:

And people beat their breasts at the thought of no longer having a church in their own patches - after all they'd always had it! But some were resolute and maintained their position with a sad look on their faces.

Then came the complaints that we didn't charge people to use the building space. 'You're undercutting us!' complained one church and the moaned at me, 'How can we pay our way if you're charging less than us? What are we supposed to do?'

Others called me foolish and yet the same people were the first to tell us how lucky we were when those who weren't paying offered us new seating and tables and helped put in central heating and the like. 'Cast you bread upon the waters ...' says the KJV - and we did and God proved Himself to be no man's debtor - and those outside complained at that!

I got into an argument because I thought that having taken money to do a wedding or funeral in a building that any subsequent offering or giving was something to be grateful for and applauded rather than become something to be complained about because it was too little.

Then I got into another argument because I made the point that when we started a church plant or a 'fresh expression' it would be good if we worked out how long we would be fully funded and then decide how the responsibility for 'paying our way' could become ours fully. Wow! This was a real red rag (as was suggesting perhaps that it was acceptable to church to ask people to pay for messy church'). People asked whether we asked those who came to other services to pay - and of course we do, what are our tithes, gifts and offerings if they are the people paying money to ensure that the church (local) pays it's way?

Bringing all of our tithes and offerings into the storehouse ensure the bills are paid and means that those with needs in the fellowship (and let's not fight over what that means for now because I have more weird ideas here too)  go without.

So perhaps we should charge for admission? 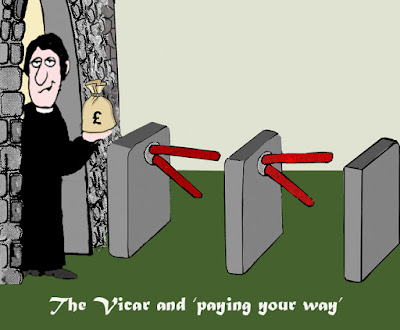 Email ThisBlogThis!Share to TwitterShare to FacebookShare to Pinterest
Labels: bringing tithes and offerings into the storehouse, Common Purse, cost of running a church, madness personified, parish share, paying your way, should anyone pay, who should pay, why isn't free

I hope (I am sure you did) that you fought your side vigorously in those arguments you mentioned.

Quick thought on the diocese: We had a discussion at our House Group this week on the local ecclesiastical bureaucracy, triggered by the not particularly enlightening experiences of a couple of our members. (As an aside, our church got some national coverage a few years ago for a major fundraiser, very positive coverage because it involved rolling our own sleeves up and not asking others for cash, which generally generates a negative impression). If people have a negative impression of diocesan bureaucracy, then they are perhaps Less likely to dip into their pockets when told how much they need to contribute.

In a similar way, as a GP I had an argument not long ago with our practice link with the local Clinical Commissioning Group (CCG). When I commented that our experience of the CCG was almost entirely negative, this person offered to take me along to their shiny new offices and show me how much hard work goes on. I countered firstly that if they had to take me to the offices for me to see evidence of what was done, it was clearly not very effective, and secondly that as the actual core NHS function of caring for patients is carried out at the practice, I felt that I was entitled to judge the CCG by what appeared from them at that interface.

Bureaucracies may start for all sorts of good reasons, but many end up existing largely to serve themselves. When I hear things such as how the CofE is going to train its Bishops in management techniques, it does not encourage me, and I will think harder and harder about whether I want to be contributing limited resources to the diocese. I would suggest that the dioceses need to start a pr exercise, but the chances are that that would end up as most do as being about words, not actions.

You could always sell indulgences.

Well done. It needs to be said.

I often get a funny look when I ask people to 'indulge me' but perhaps it's worth a try - usually seek them rather than sell them.

Thanks for comments all,