This week began on a high as I joined with other ministers from across the town for a two-day session facilitated by Neil Hudson of LICC*.

One of the things that resonated with me was Neil's account of him joining a gym which goes a little like this . . . .

Having arrived at the gym our hero is greeted by a fine example of fitness and muscles all bound into one who asks why he is considering joining a gym. The true answer is that he (Neil) would like to look like the man questioning him but instead (feet shuffling slightly) he mumbles something about 'general fitness".

Our Adonis asks, "So how often will you be visiting the gym?" and the response, "A couple of times a week," brings back the response, "Not enough, you need to do more than that to get fit!.

Swiftly, Neil modifies his position and ups the ante to 'three days' in the hope that this will suffice but this is met by another question asking him to think back to the previous week and think about what he would have to have given up to make it three visits to the gym.

Time for a 'freeze frame' here as we hit point to consider the first!
Had this been church we were talking about - would we have challenged those considering coming to join us about how they were going to meet their commitment to membership? I think not!
Let us continue . . . .

A few days later, our hero and the hunk pass one another in the corridor and although they acknowledge one another in passing, there is no dialogue of the sort that might occur had it been a church building and this says much in that:

point to consider the second
There was no engagement from Adonis whereby the new member was congratulated for being there. What was going on was that the new member was merely being regarded in the light of their stated intentions being a true representation. There was no 'Thank You' for coming or neediness on the part of the gym but perhaps Neil should have been thanking them for being there and making the place available to him and being willing to take time to educate, bring about change lifestyles, attitudes and a healthier outlook (and potentially longe and better life).

It's interesting that in the gym setting the members take advice, instruction and correction from those who are on the staff whilst in church we often try to avoid these things in case the new member leaves!

So off the new member goes to test himself and extend his capabilities and consider all that his personal trainer has shown him. He consider the things that are bad for his physical body and as he struggles on the road that leads to fitness and well-being he readily accepts correction and suggestions of how he might 'raise his game' so that he can run his race and receive the crown of general 'well fuit' approbation!

Point to consider the third
What we have in this example is two different setting with the same desires (albeit that one is spiritual and the other physical) and, were we (The Church) to be bold enough to take up the practice of the trainer and attitudes of the the gym, would more than likely find the same responses and progress made in the new member.

People who join a gym (and see it through) know what they want and are willing to do what it takes to run the race and reach their goal.

People who join a church are similar but we don't challenge them to ascertain how they might make their commitment reality  and how we can aid this (so how are you going to come of a Sunday - and if you can't when would you like us to be open for you?).

The road to hell is paved with good intentions (and unused gym memberships) - the reason for this is that we all like the idea of a sound and fit body but intentions and practice are rarely one and the same thing unless we have desire and people who will challenge, demand and, most importantly, provide the place, means and relationships to make our intentions concrete.

We live in a world of physically and spiritually unfit people - when are we available?

My local gym bears the message

'open when you need us to be - here when you want us to help'.

Pity the Church hasn't learned this ;-) 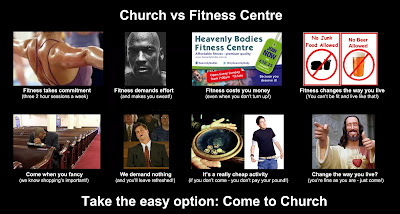