Boxing Day - All about being called out, dragged outside and being stoned!

Yesterday the focus should have been On Jesus - God made man.

Today we find ourselves being drawn to present ourselves outside our local Next at 06:00 or to join in the clamouring crowds at Debenhams or other such outlet by the adverts. We are encouraged, nay cajoled, to get out there and rid ourselves of whatever money we have managed to hang on to in the run up to Christmas Day.

Of course today is 'Boxing Day' - a day of cold cuts and time off for those in service (well once upon a time that was) - a day which for as long as I can recall was generally about sales and sport. Whitings, Gamages and other stores in the morning and the Arsenal (or the Spurs) in the afternoon.

Well that was the reality for much of my life - being brought up in a decidedly non-believing household - and even when I came to faith, this continued to generally be the set menu for the day. Too. That is until I became a 'full on', card-carrying, Anglican.

As a free church charismatic I learned nothing of the Church's seasons nor the saints and heroes of it either. Sadly the same was true as my journey passed through being a Baptist (where it all began) and into (and out of) the world that is Pentecostalism - although I gained Spurgeon and Wigglesworth as heroes on the way. This situation was remedied when the superficial nature of my 'Anglicanism' was put aside for the joys of seasons and feasts, festivals and saints.

It is ironic that from the rigid structures of those churches who had a free liturgical pattern of worship  it was the all too often proclaimed (and much despised) vain repetitions of the Church of England that gifted me the richness of saints and seasons - feasts and festivals.

It is ironic too that it was within the Anglican setting that the Bible suddenly expanded into the fullness of having sixty-six books (rather than Paul's writing, the Gospels and a few other books besides). The reason being that whilst the teaching might have been good elsewhere - it was generally only good in part and the parts considered were fewer in number than the whole!

Yes - I have to admit that I am a sucker for the Lectionary and for feasts, festivals and the 'red letter' days: And today is one such day - being the feast day where we remember the Saint (meaning one whose life is an example to us), martyr and one of the first deacons: Stephen.

So, drawing upon the words of Acts 6 and 7, let's take a muchly condensed look at Stephen:

The Church was growing and the demands, and tensions within it, were growing such that the Apostles found themselves being drawn away from ministering the word to deal with the logistical and 'day to day' stuff. So they decided to set aside (or 'call out') seven men to do the 'hands on' stuff - and one of these was Stephen. The others being; Philip, Procorus, Nicanor, Timon, Parmenas, and Nicolas from Antioch (a Jewish convert).

They were commissioned by the laying on of hands and sent out to do the stuff - and Stephen did (with sound speaking and signs and wonders) to the extent that people got niggled with him and set him up - the result being that he was falsely accused and eventually taken outside and stoned to death (whilst a bloke called Saul minded the coats of those doing the stoning).

This is an important passage because it is the beginning of the diaconal role (which means being a deacon - one called out to assist those who preach the word by doing the 'hands on' and practical day-to-day stuff).

It shows how being a deacon is more than just the 'hands on' for Stephen performed signs and wonders (which should follow the preaching of the word) and spoke publicly (evangelistic and proclamatory ministry too!).

It is the first example of 'calling out' members of the Church into ministry and is the beginning of the model of Church that demands all-member and collegial ministry - an obviously Biblical and longstanding model!

So, as we approach the year's end perhaps I can cheekily encourage you to read your Bibles and keep an eye on the Lectionary to see who we are celebrating (and perhaps I'll start featuring them each day too to assist here) and to ponder on who they are, what they did and what their lives might encourage us to be. 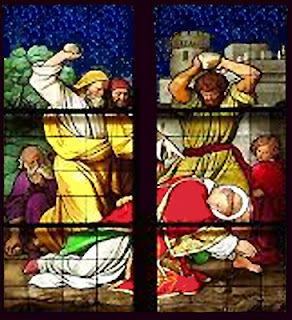